7 of the most inspiring speeches from female visionaries 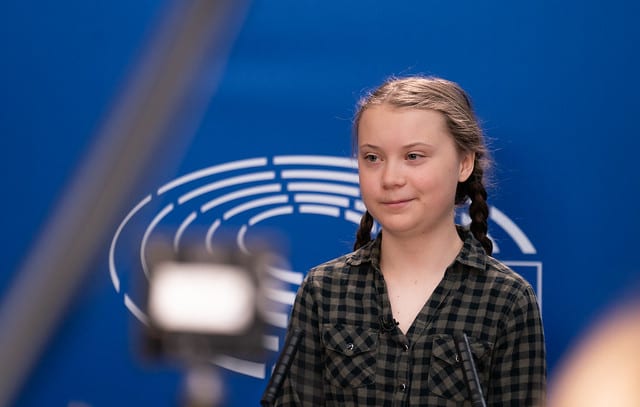 What inspires women in business? Role models who have overcome tough challenges and maintained their values. Courage and vision. Those are the key components of success in business. The discipline to shape a clear vision, the courage and drive to see it through and the values to stay on course to make it truly meaningful in your life. Without values, success is hollow and feels worthless.

That kind of inspiration comes from some female entrepreneurs. It also comes from women in other life paths who have vision, drive and courage.

You can find powerful speeches for every situation on YouTube, TED and speaker bureau sites like NMP Live. But where do you start?

We have curated some of the most powerful speeches from female visionaries. Listen to Greta Thunberg, Wangari Mathai, Martha Lane Fox, Malala Yousafzai, Dame Stephanie Shirley, Julia Gillard and Hillary Clinton. It will be time well spent.

The penny has just dropped in policy circles that a massive programme of tree planting is needed to absorb the effects of climate change. Wangari Mathai had that critical realisation 40 years ago. The Green Belt Movement she founded in Kenya, went on to plant 30 million trees and deliver an improved environment and livelihoods to vast numbers of people.

Wangari was awarded the Nobel Peace Prize in 2004. She said in her acceptance speech: “I came to understand that when the environment is destroyed, plundered, or mismanaged, we undermine our quality of life and that of our future generations. Tree planting became a natural choice to address some of the initial basic needs identified by women. Also, tree planting is simple, attainable, and guarantees quick, successful results within a reasonable amount of time. These are all important to sustain interest and commitment. So together we planted over 30 million trees that provide fuel, food, shelter, and income to support children and education and household needs. The activity also creates employment and improves soils and watersheds.”

Greta Thunberg – ‘Your house is on fire!’

15 year old Greta Thunberg’s lonely and individual protest against climate crisis has become an international movement of school strikes for the climate. When she could find no-one else to join her in her ‘school strike’ protest outside the Swedish parliament, she went ahead and did it alone, for 3 weeks from August 2018 up to the Swedish elections and then after that on Fridays.  Gradually the strike gained publicity on social media and the idea spread viraly. In March and May 2019 1.4 million children in 112 countries took part in school strikes for the climate.

Greta speaks with precision, passion and anger on behalf of young people. Her message is making a difference, in what’s been called the ‘Greta Thunberg effect’, with an increased vote share for the Green Party in the 2019 EU elections, increased use of public transport in Sweden etc.

Dame Stephanie Shirley – ‘Why do ambitious women have flat heads?’

Back in the 1960s, when women were more likely to become computer programmers than men, Steve Shirley (as she was called then) set up a company that went on to employ 8,500 of part-time, home-based, mostly female programmers. “It was a company of women, a company for women, an early social business,” she says.

Why did she call herself Steve? To overcome the blatent gender bias in business at the time. It was just so much easier to use a male-sounding first name in correspondence; things moved forward more quickly and smoothly.

The business was eventually valued at over $3 billion and 70 of her team became millionaires. But Dame Stephanie wasn’t in business for the money, she wanted to create the kind of work place that would work for women like her. “A lot of people go into business to make money,” she told the Guardian. “I really didn’t; I went in with a mission for women. Conversely, I was determined never, ever to be poor again.”

Martha Lane Fox is an internet pioneer. In 1997 she co-founded Lastminute.com with Brent Hoberman. Last Minute floated at the peak of the DotCom bubble and Martha Lane Fox became the icon of early-peak internet.

She’s used her status as DotCom poster girl to campaign for a fairer, more accessible digital world for all. She set up the DotEveryone think tank to campaign for responsible, socially inclusive technology. A large part of that is advocating for more women in tech jobs, leadership and entrepreneurship.

Despite the promise of an new industrial revolution that seemed initially to shake up business norms and hierarchies:”the internet is still run, funded, and made by men,” she said at the  2016 Women and World festival.“There’s something wrong here in an industry that didn’t exist 30 years ago and has so quickly replicated exactly the same hierarchies,” she said

Martha has gone on to become a non-executive director of leading companies, including Twitter and Marks & Spencer and to be appointed a cross-bench member of the House of Lords.  She’s a committed, inspiring and passionate voice for female entrepreneurs and innovators.

On her 16th birthday, in 2013, Malala Yousafzai delivered an address to the UN that gripped the attention not just of the present world leaders but the entire world.

In 2012, the Pakistani schoolgirl had been shot in the head by the Taliban and was brought to the UK with her family for treatment and safe haven.

Her speech called for free education for all children across the globe as a combat to extremism and violence. She was later awarded the Nobel Peace Prize.

She said: “Let us pick up our books and pens. They are our most powerful weapons. One child, one teacher, one pen and one book can change the world. Education is the only solution. Education first.”

Then Prime Minister of Australia, Julia Gillard’s, impromptu speech against misogyny in politics was incendiary. She spoke with fire and passion. Not surprisingly it went viral and remains a masterclass in not putting up with casual and insidious misogyny and sexism.

Back in 1995 long before she became a political force in her own right, Hillary Clinton gave this ground-breaking speech to the UN Fourth World Congress on Women in Beijing.

The speech marked a turning point in how women’s rights were understood in politics and policy. It established the concept that equality and fairness for women benefits everyone.  “As long as discrimination and inequities remain so commonplace everywhere in the world, as long as girls and women are valued less, fed less, fed last, overworked, underpaid, not schooled, subjected to violence in and outside their homes — the potential of the human family to create a peaceful, prosperous world will not be realised.”