How can women in business help get more girls into STEM careers? 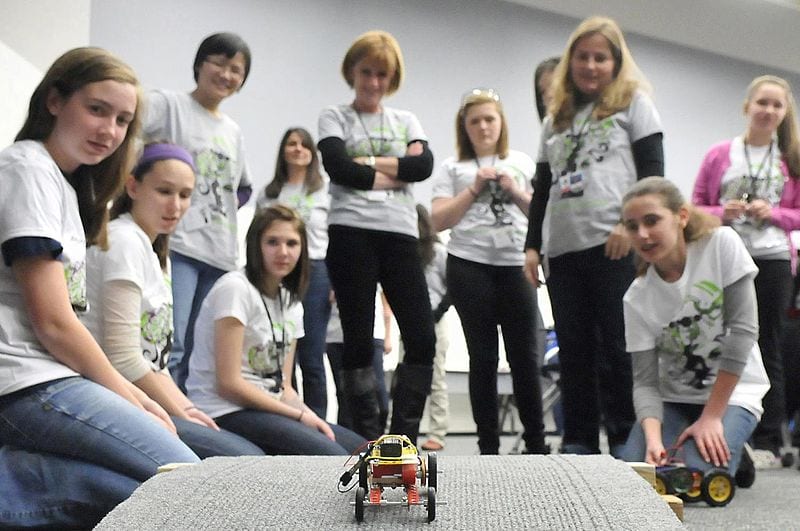 Business is still a majority boys club, not exclusively, but in numerous fields. Part of the issue, especially in technical and scientific fields such as STEM subjects (Science, Technology, Engineering and Maths), is that young women and girls aren’t encouraged to pursue these subject and turn them into careers.

So what can women in business do to help create the next generation of leaders, and keep girls who love STEM in education longer?

Women drop out of STEM subjects just before Further Education

Girls’ study of STEM subjects (science, technology, engineering and maths) declines considerably when they reach further education (FE), with female students making up less than a tenth of those studying for A Levels in computing, and around a fifth of those studying physics. Male students outnumber women by 25 to one on engineering apprenticeships and 56 to one on construction apprenticeships.

AoC Jobs, who recruit for lecturing, technician and support jobs in FE note that ensuring the supply of professionals to inspire future STEM talent is paramount. As they explain, “the teaching and learning of Science, Technology, Engineering and Maths (STEM), particularly in further education, has reached a critical stage” if we are to close the growing industrial skills gap.

It’s vital, then, to get more girls into STEM at FE, to have them in the careers beyond. This, we can do, by ending negative stereotypes of girls in STEM, increasing the number of role models for girls in STEM industries, and increase the number of female leaders in STEM teaching at FE. This is where women in business can be the most beneficial to the next generation.

We must dispel girls’ stereotypes of STEM

According to research by Accenture, girls’ reported enjoyment of traditional STEM subjects such as maths and computing drop by as much as 20% as they enter secondary school.

The reason? It’s been reported that girls think STEM subjects are “too difficult.” Nearly half of twelve year old girls asked thought the subjects were a better match for boys’ brains and personalities. The perception that STEM subjects are more suited to boys is the primary reason teachers believe fewer girls take up these subjects at school.

It may well be a systemic problem: 57% of teachers admit to having themselves made subconscious stereotypes about girls and boys in relation to STEM. These stereotypes have proven to be unfounded, as girls are outperforming boys in STEM across all aspects of FE.

If we are to dispel girls’ stereotypes of STEM, it begins with increasing the representation of women in STEM industries and in the media. Currently, just 14% of the UK STEM workforce are women, and the number of female role models are few and far between.

In an informal survey run by the UK Digital Skills Taskforce, young people were asked to name people working in the digital industries. “Most people have heard of Bill Gates and Mark Zuckerberg but struggle to cite a female role model”.

The study showed that many young people felt that STEM (especially tech) industries are very much a male dominated environment with very few visible female role models. Young girls report this is a factor that deters them from pursuing a career in STEM: 60% of girls responding to a 2011 Girlguiding UK survey said the lack of female role models put them off pursuing a career in STEM.

Dana Skelley was the first woman to be recognised as engineer of the year in 2006. She told the Guardian she believes raising the visibility of women in nontraditional jobs, such as engineering, is important for encouraging girls into apprenticeships.

While high-profile industry leaders in STEM are in short supply, it’s key for female teachers, lecturers and support staff take on jobs in FE to make role models of themselves in order to encourage more girls to take up STEM subjects post-16. Female STEM professionals transitioning into jobs in FE can make a huge difference in inspiring more girls to pursue the subjects.

Currently, seven times more men than women teach engineering in FE colleges, and it’s important to do something about that if we are to promote greater uptake of STEM subjects by girls. The Royal Academy of Engineering launched a Visiting Teaching Engineers (VTEs) programme last year, which places professional women engineers into teaching jobs in FE colleges across the UK.

Whether through academic study or vocational study, of A Levels and apprenticeships, FE teachers as well as women holding technical and support jobs in FE have a responsibility to quash the stereotypes and encourage greater participation of girls in a field and industry where they are needed more than ever before.

2 thoughts on “How can women in business help get more girls into STEM careers?”