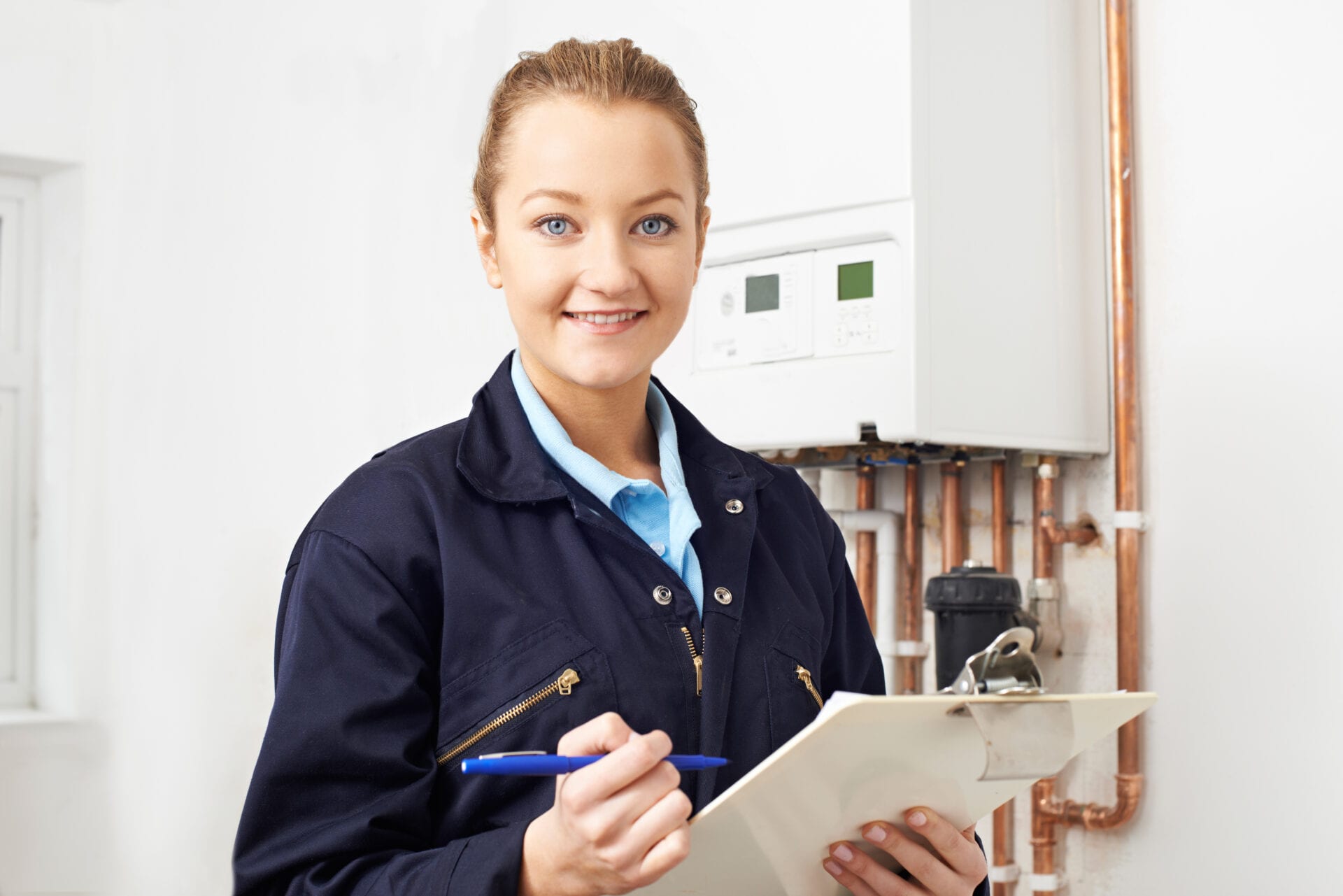 Long gone are the days when women were all but barred from trade professions. The number of women working in construction trades has more than doubled in the last decade. Women are joining the ranks of builders, plumbers and electricians, with 18,000 more women joining these professions since 2009.

Some of this comes down to biases and myths surrounding engineering, and sadly there remain some elements of sexism. That said, there are plenty of opportunities for women who want to join the heating industry, and women should consider becoming a heating engineer as a viable and fulfilling career choice.

It’s important that women don’t write off becoming a career in heating because of myths and misconceptions about the role. Instead, in this article, we’ll learn why women should join this field and give you a realistic idea of what it takes to work in the plumbing and heating industry.

Women should consider becoming heating engineers (which by the way, are different to plumbers) because the industry is in desperate need of people. There’s a serious shortage of qualified heating engineers in the UK. A significant number of Gas Safe registered engineers are heading towards retirement age, which could leave the country with a worrying skills gap. According to figures from the Gas Safe Register, around 97,000 current gas engineers (which represents more than three-quarters of the total workforce) will hit retirement age by 2029.

There’s also a huge demand for female tradespeople, especially among vulnerable customers and other women. A survey from Watersafe found that 31% of women respondents would prefer to have a female plumber work in their home. A 2018 survey conducted by the Federation of Master Builders found that more than a third of homeowners in London would prefer to hire a female builder or tradesperson. 33% say that they would feel safer with a female tradesperson in their home. This shows that many vulnerable people, elderly or female customers might prefer to have women installers come and fit their boiler, or choose female engineers to work on their central heating.

So, what’s stopping women from picking up this career, and what are the opportunities available to women in this industry? Let’s look a little deeper.

There are a lot of myths around engineering that can put women off joining the industry, and lead to fewer young women becoming heating engineers.

One popular misconception is that women aren’t as good at STEM subjects (science, technology, engineering and maths) as men. But this is simply not the case. Studies show that girls regularly outperform boys at GCSE STEM subjects. However, despite this success girls often don’t go on to pursue these subjects at A-level and beyond, leading to a gender imbalance at university and later amongst heating engineers.

Another popular myth is that you have to be strong or get dirty to be an engineer. Again, this isn’t always the case. Plus, there’s no reason why women can’t handle a job that requires strength or getting their hands dirty. Gender bias might suggest that women are better suited to certain kinds of jobs, but there’s no physical reason why a woman can’t become a heating engineer. As long as you can lift relatively heavy objects and do your job safely, you don’t need to have the strength of The Hulk.

A lack of gender diversity in the industry can also put women off applying to become heating engineers. One YouGov survey found that 53% of young women aged between 18 and 24 are put off entering the electrical and plumbing industries due to this issue. 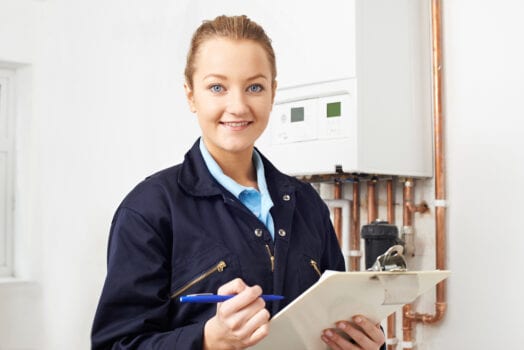 What are the opportunities for female heating engineers?

There are plenty of great opportunities for women in the heating engineering industry. Many women who are already plumbers or engineers say that they enjoy flexible working hours, which give them the chance to control how they spend their days, and balance work with family life.

There’s also the simple good feeling and job satisfaction that people get from helping vulnerable customers during a difficult time. When someone loses their heating during a cold spell, it’s bad enough. When it happens to an elderly customer, it can be downright awful. Many vulnerable and elderly customers feel safer dealing with female tradespeople, representing an exciting opportunity for women to join the industry and help people feel safe in their homes.

Finally, this is an industry that is crying out for new blood. As mentioned earlier, the UK is facing a skills shortage as a large number of heating engineers reach retirement age soon. Alongside this, the number of boilers being installed in UK homes shows that demand for these skills isn’t going to go away any time soon. According to Neil Macdonald, Technical Director at the Heating and Hotwater Industry Council, 1.7 million boilers are being installed each year, and 21 million are being serviced. If the skills gap isn’t filled up soon, then there will be long queues and delays for people who need new boilers fitted or serviced. Customers face waiting in freezing houses to get their central heating fixed. By attracting more women into the industry, heating problems can help to solve this problem before it becomes a full-blown crisis.

According to British Gas, we’ll need nearly two million new engineering, science and technology professionals in this country by 2022, and there is plenty that heating companies, schools and universities can do to encourage women to help fill these roles.

What skills qualifications do you need to be a heating engineer?

To become a heating engineer, having GCSEs in STEM subjects is a good start. To get on an apprentice scheme for gas engineering, you’ll need a grade A*-C GCSE in maths and English, as well as GCSEs in science and technology-focused subjects.

However, if you don’t have the relevant GCSEs, there’s no need to give up hope. Other learning programs will consider you as long as you have an interest in working in the gas industry, enjoy problem-solving and practical working, and want to work with people.

It’s a given that, if you’re going to be fixing and installing boilers, then you’ll need to be a people person, so confidence in dealing with people is a must. It’s natural to feel shy when handling your first customers, but you’ll need to feel confident enough to go into people’s homes and offices and explain technical issues to them.

An eye for detail is also a vital skill for heating engineers. When boilers break down or go wrong, things can go wrong very quickly. The last thing you want is to miss something on a job that can lead to a breakdown and loss of heating, or worse, a gas leak which could be fatal.

If you want to work with gas boilers in this country, then you’ll need to be a Gas Safe registered engineer. To do this you’ll need to get an ACS in gas, which shows that you’ve been assessed and considered competent to deal with the gas appliances for which you are qualified. You’ll need to retake your ACS every twelve months, which will keep you up to date with all the latest industry changes.

How employers can promote gender diversity for heating engineers

There is plenty that employers can do to help drive gender diversity in their companies and encourage more women to join the heating industry.

One easy way to encourage more women to apply for jobs in their companies is to consider their job specifications more carefully and watch out for gender biases.

For example, you’ve probably heard the statistic that men apply for jobs if they meet only 60% of the requirements. Women on the other hand will only apply if they meet 100% of them. Therefore, companies should consider if all those qualifications are really “must haves”, or “nice to haves” before publishing that job advert.

Language in job adverts is another barrier that may be putting women off. Glassdoor recommends using gender-neutral job titles in job descriptions, and avoid using words like “rockstar” or “ninja” if companies want to attract more women.

Despite the current gender imbalance in the heating industry, there are some incredible opportunities for women considering a career as a heating engineer. The industry is crying out for new people and women are more than capable of filling the skills shortage.