Female innovators: taking the risks out of cycling 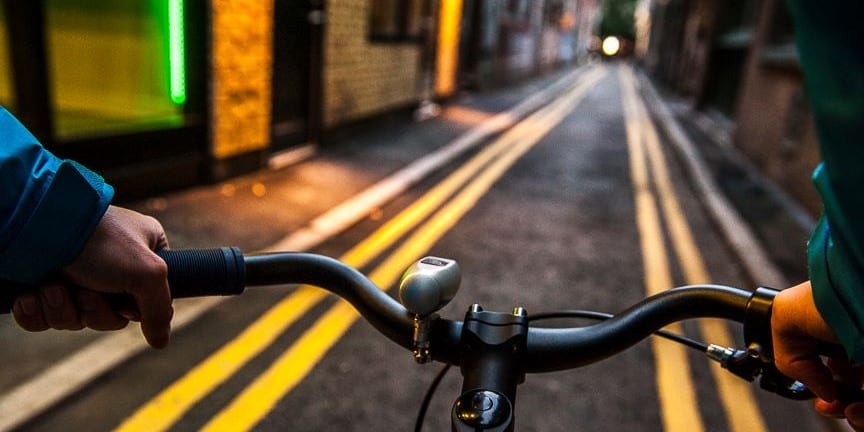 Women are much more likely to be deterred from cycling due to concerns about road safety. So, perhaps it’s not surprising that female innovators seem to be dominating the development of cycling safety products. Here are a couple, that could revolutionise cycling and help more of us to reap the health and environmental benefits.

The vast majority of cyclists put comfort and style before safety: only 20% of us wear a helmet. Anna Haupt and Terese Alstin understood the problem perfectly: “I don’t want anything on my head. I don’t want my hair to be destroyed,” said Alstin. As industrial design students in Sweden they started to work on solutions and 7 years later, in 2014, they launched the Hovding invisible bicycle helmet. How does it work? It really is worth watching this video to find out!

Emily Brooke started her company Blaze, to make urban cycling products, just a year ago. Their keystone product is Lazerlight, a mountable LED light with a laser that projects the symbol of a bicycle 5-6 meters ahead of a cyclists to counteract the issue of collisions due to blind spots. Lazerlight is currently available on the Blaze website.

“I was one of the first UK-based businesses to attempt raising funds through Kickstarter,” Brooke said, “The goal was to raise £25,000 in one month. But I managed to raise it all in under five days.”

Blaze was Brooke’s final year project in 2011 while she was studying design at Brighton University, but it became her full time business in September 2012. Now she has five people working out of a Shoreditch based office and exciting plans for her future including six products for future development. Situating the hub of Blaze in the techy Shoreditch, close to Silicon Roundabout and Old Street, Brooke finds that being not only a single founder of a business but also a woman sets her apart.

“People ask if I get treated differently, but the great thing is that it makes me more memorable. So I really have nothing to complain about,” Brooke said.

Blaze has had funding support from two speed venture rounds, the first coming from a small angel investor, friends, and family and a most recent investment of £500,000 from the Branson family and Index ventures. “I was one of the first entrepreneurs to be included in an accelerator called Entrepreneur First, a UK based tech accelerator. I’m also now part of PCH  International’s accelerator scheme which helps hardware startups make the step from prototype to refined product, with access to the same skills, resources, processes and facilities currently used by the world’s leading brands.” This means that Brooke has the same supply chains as the likes of Apple.

With such a strong backing and an extensive upcoming range of new products, Blaze’s future looks bright. And to all future would-be entrepreneurs, Brooke has this advice: “Go ask people who know better. I had never grown a company, a team, never raised money, never done any marketing… but there is always going to be someone who has. So go and ask nicely, be appreciative of their time, and ask a lot of questions.”

This article and the Blaze interview was written and conducted with the help of Virgin Startups, an initiative by Virgin to provide funding for small businesses.