Success on the cards for Jessica Huie 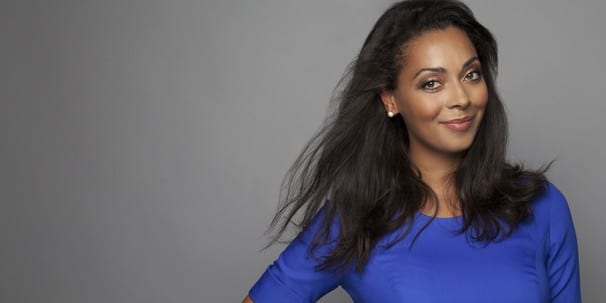 Jessica Huie’s prospects looked bleak as a 17-year-old teenage mother. But early responsibility gave her the drive and determination to provide for her daughter. She grew up fast and forged a successful public relations career with celebrity publicists, Connie Filippello and Max Clifford. Still only 33, Jessica has gone on to found the award-winning Color blind Cards, which her daughter inspired, and establish her own PR company, JH Public Relations.

“I started Color blind Cards when I was working full time in media, enjoying a really successful career in public relations and journalism. I was looking for a card for my daughter Monet who was 7 at the time. She was going through this stage, as many little girls do where she hated her hair and seemed uncomfortable in her own skin, so I went looking for a greeting card that would subtly reinforce her sense of identity and make her feel like a princess.

This was 2007…there was a complete absence of cards featuring black, mixed race and Asian people.

On my lunch break, I went to Oxford Street and scoured the stores for cards for a brown princess or somebody that would look like her. I just realised a complete absence of anything that was representative or illustrative of the fact that we live in one of the most multicultural cities in the world. This was 2007, and I checked every department store, every card and gift shop and noticed a complete absence of cards featuring black, mixed-race and Asian people. On a social level, it seemed wrong and on a commercial level it seemed like a massive oversight, particularly when the mixed race ethnic group is the fastest-growing group in this country. I am quite an impulsive person by nature and in that moment I decided to be the person to put multi-cultural cards on high street shelves,” Jessica says.

Starting with just 12 card designs, within seven months Jessica secured a deal with Clinton Cards which was the biggest card distributor in the UK at the time. “They trialed us in 10 stores initially and we exceeded the sales targets. They rolled us out to 100 branches of Clintons’ which was a massive achievement and I won a couple of business awards including the Daily Mail’s Enterprising Young Brit. As a result of that article, which went online, a US distributor picked us up and very quickly we had a presence in a number of countries around the world – Bermuda, Barbados, Washington,” Jessica notes.

Color blind Cards will be expanding once again with the product to be sold later this year by a major British supermarket chain and by Staples, which has over 1,500 locations worldwide.

Being your own boss

Alongside Color blind Cards Jessica is still passionate about PR. Inevitably she has set up her own PR firm, JH Public Relations.“Starting the PR Company was sort of an organic evolution from all of my years of experience working at the pinnacle of the British media,” Jessica says. We have worked with everybody from Hilary Devey, formerly of Dragon’s Den, to Deirdre Bounds founder of i-to-i (the gap year travel company which she sold for £20 million). Recently the launch of our Start-up PR service has seen us begin to work with smaller businesses and less established entrepreneurs which is wonderful.”

Jessica is savouring the simple benefits of being her own boss: “I don’t miss the nursery shows or the school assemblies anymore like I did when I was employed,” she say. While she has more control over her schedule, juggling work with time for family is still a real challenge: “I work an average of 15 to 16 hour days and it not unusual to get emails from me at 2 am which is probably my most productive time,” she says.

Despite all her business success, graduating from university was Jessica’s proudest moment: “When I became pregnant my parents were devastated,  my dad worked 7 days a week while raising us to give myself and my siblings every opportunity and naturally he was very disappointed. So when I graduated from university it was as much for him as for myself.”

Color blind Cards is a business with a social purpose: it gives children access to positive images that resonate and represent their own identity. And Jessica is rightly proud of the impact it’s making. “Seeing Color blind in the shops for the very first time in the UK, having Color blind Cards go into South Africa in Johannesburg because of how recent apartheid was, to use our product to make a contribution to society, and of course that surreal invitation to a round table on enterprise with the Prime Minister at number 10 Downing street, were all massive highlights of my journey so far” she concludes.