One million starts with one, that one is you! 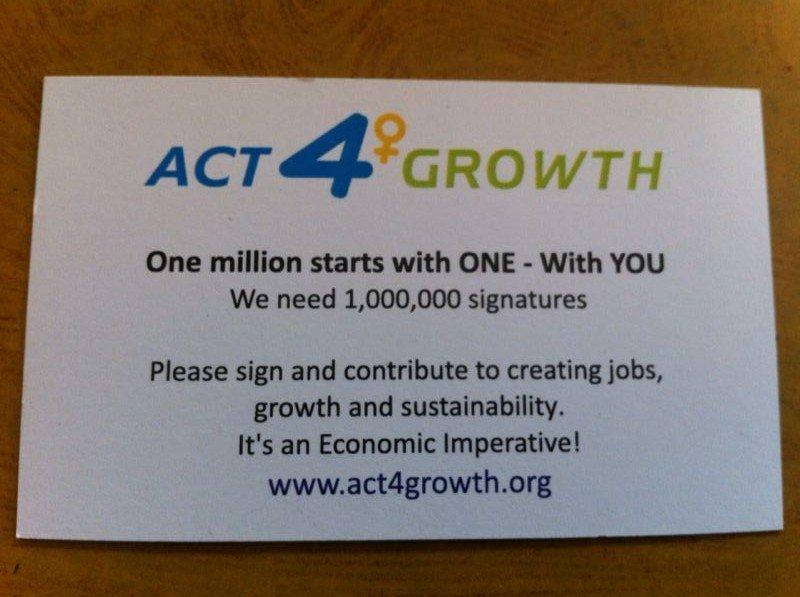 “An EU Citizens Initiative is a citizen’s opportunity to change policy and become included in the decision making process in Europe. This EU Citizens Initiative is specifically for female Entrepreneurship,” says Madi Sharma who is leading this EU-wide campaign for women entrepreneurs. The campaign needs to collect 1 million signatures. Below Madi outlines why it matters and why you should sign.

“As an active entrepreneur who has succeeded, failed and succeeded, I know that being a woman in business isn’t always easy but it is great fun! I know I also have a responsibility to drive change to make it easier for others coming behind me.

“A European Citizens Initiative is an EU instrument set up within the European Treaty and legislative process to enable citizens of the EU to have a voice. To achieve its goal of changing policy to support and promote female entrepreneurs we have to collect 1 million signatures from across Europe. We’ve called our campaign Act4Growth.

[quote]This is not a gender issue, this is an economic imperative. Female entrepreneurs are an economic resource of jobs, wealth creation and innovation, and they are currently ignored by national governments and EU policy makers and hence we need you to SIGN at www.act4growth.org [/quote]

“Female entrepreneurs have played an important role throughout the financial crisis. Statistics from the 2013 State of Women-Owned Businesses Report, commissioned by American Express OPEN, show Women-owned business added 175,000 net jobs verses a national net decline of 569,000 jobs among all privately held companies between 2007 -2013. In the same period the number of all women-owned companies grew by 59%. There is an estimated 8.6 million women- owned companies, generating nearly $1.3 trillion in revenue employing 7.8 million people. The fastest growth of women owned companies came from education, administration services, waste, healthcare and social assistance, alongside a 40% growth in transport and warehousing. No sector is now without women-owned businesses. “These are statistics from the United States as Europe does not collect comparable statistics. However, knowing that in 1988 the US adopted four policy actions which double the number of female entrepreneurs across 10 years, there is now a movement to create the same enabling environment in the European Union.

What Needs to Change

Act 4 Growth, presents 4 key pieces of policy needed to increase the number of female entrepreneurs as presented in the 1988 US bill.

Details of the report and how to sign the initiative can be found on the Act4Growth website www.act4growth.org  “The EU Citizens Initiative is a citizen’s opportunity to change policy and become included in the decision making process in Europe. One million starts with one, that one is you!”