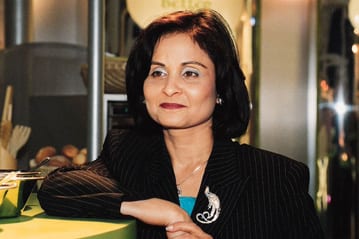 Perween Warsi started her business with just £2.50 and an audacious goal: she wanted the whole nation to enjoy her food. 25 years later with a multi-million pounds turnover, that dream has almost certainly come true.

Perween has been the catalyst for the popularity of Indian food in the UK. After coming to the UK in 1976 she noticed there was a lack of Indian cuisine available in supermarkets and stores. By the 1980s there were a few products available but Warsi was disenchanted with the poor quality and it prompted her to start S&A Foods.

“When I came to England there was nothing available and I lived on cauliflower, peas and potatoes. In the 1980s I saw some so-called Indian food on the market and I tasted them and it was just the taste, we could not eat it. I bought some samosas and the pasting was soft, it did not have enough filling, there were not enough spices. It was not samosas like my mum would make. I was very disappointed so I wanted to put the quality right,” Perween recalls.

S&A Food is now celebrating its 25th anniversary and enjoys a multi-million pounds turnover, with Perween still amazed by the giant strides she had made over the years from its humble beginnings.

“When I started from my own kitchen I started with £2.50, a bag of flower, a bag of potatoes, onions and some oil. That’s how it started and I came up with the idea by myself and I wanted the whole nation to enjoy my food and here we are now. We are quite a good size company, we employ 100 to 500 people in the business that has been with me for quite some time and it’s a great business. We supply products to supermarkets, wholesalers and distributors in in England as well as in Europe,” she reveals.

The ‘Curry Queen’ explains that the key to her success was due to her strong will to succeed and to deliver a quality product to the consumers in the United Kingdom: “I like challenging the status quo and I believe if people wanted to eat Indian food they really want to enjoy the food because Indian cuisine is so wonderful. So I set myself out to put that right and the challenge was that I can do it on a small scale but how do you do it when you up the scale of everything! My vision from day one was seeing the whole nation enjoying my food and that is what I wanted to do.”

It was not all smooth sailing for S&A foods with two major challenges causing a great deal of problems en route to success. “My first challenge was to make onion patty believe it or not. When I went to pitch for a small business they would love all the food but what they did not get from me was onion patty because I had never seen onion patty in my life and I spent a couple of weeks trying to make it.

“It kept on being a disaster, they would either be burnt outside and raw in the middle or get cooked but be oily, it was all kinds of disasters. I was so determined to perfect it and I honestly don’t think I will ever eat so much onion patties in my life as I ate in those two weeks. But I got it right and it became a fantastic seller.”

You have to manage your costs

She continues, “My second challenge was, after winning business from the supermarket, we moved into a small unit in the industrial estate and we were growing rapidly. Every day the orders were increasing and being passionate about the product and consumers – these two were our focus, so let’s get the best quality food out of the factory and let’s not short our customers. We were so engrossed in those two criteria and key performance indicators that we took our eye off the cost.

For a couple of weeks we kept running out of onions. The onions went into two products – pakoras and onion patties. The patties were doing very good, the ladies were making it, there were no problems and it was absolutely to the weight. So I followed through the process, got into the filling area and I realised the boys and girls were packing 10-12 grams extra in each pack. It’s not their fault, they were doing it simply to get the orders out because the orders were sky high. That was where the problem was, so what I learnt was sales at any cost was not a clever strategy. You have to manage your costs,” Perween notes.

With such a keen eye for business she reveals that several other pioneers in their field have earned her respect and inspired her: “Who would not have admired Steve Jobs. What a visionary! What a brilliant brain! He had the eye for beauty, he realised computers, mobile phones don’t just have to be functional, they can also be beautiful. He challenged the norm, what a brilliant person and what a great loss. I also admire James Dyson who is an inventor, because he keeps bringing something new and inventive to the market – making life easier and saving cost,” says Perween.