What the Chancellor Has In Store for Self-employed Women 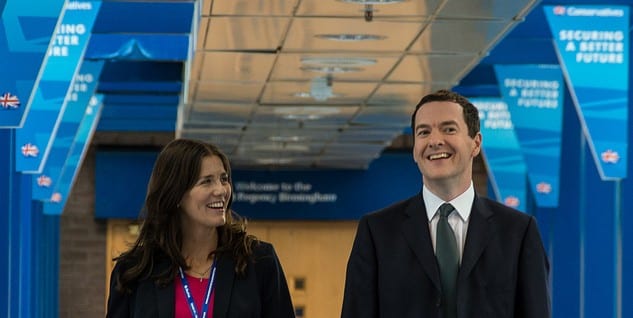 ‘760,000 more businesses since 2010.’ The Conservatives are claiming this as a key achievement. They’ve plonked it right in the middle of their new election campaign poster.

Should we be celebrating this dramatic shift in the labour market? Arguments for and against growing numbers of self-employed people continue. Here at Prowess we believe that self-employment can be a positive choice for most people and we’re also clear that start-ups are more likely to flourish and grow from solid foundations of skills and investment. The debate about whether self-employment is a good or bad thing misses the point; what matters now is how policy makers respond to those labour market shifts to enable more of the self-employed to build sustainable businesses and livelihoods.

The Chancellor has some powerful policy levers at his disposal and the impact of his choices is not even. Independent research by the House of Commons library shows that, so far, women have had to bear the brunt of 85% of austerity savings – £22bn of £26bn. Have self-employed women fared any better?

In his last Autumn Statement before the election, the Chancellor offered some support for business, but little for the self-employed who have been at the sharp end of the cost of living crisis. The Women’s Budget Group (WBG) analyses each budget statement for its impact on women, the latest report is just out. Prowess contributed a review of self-employment measures. Here is our summary of what the Autumn Statement offers self-employed women.

The Statement announced changes that will tighten the eligibility conditions for low-earning self-employed people claiming tax credits. From April 2015, those earning less than the equivalent of the minimum wage for a 24 hour working week (£156), will be subject to a new test to show they are involved in ‘genuine and effective’ self-employment.

The Chancellor has estimated that those changes will reduce the Tax Credits bill by £45 million per year. DWP’s research suggests that most of those funds will come from women.

While women comprise around one-third of the self-employed claiming tax credits, DWP research, weighted to include more low earners, resulted in a sample which was two-thirds female. Many of those women are combining self-employment with care for children or other family members or managing their own health conditions. As the DWP report states:

“Finding out about people’s routes into self-employment and reasons for sustaining this way of working show how important self-employment can be in supporting other arms of government policy – strengthening families and support for children, and enabling some people with severe health conditions to participate in employment”.

Setting this new threshold at 24 hours’ work per week also appears to discriminate against self-employed workers with childcare and caring responsibilities, predominantly women, and disabled people. Those groups can access Working Tax Credits if they work a minimum of 16 hours per week, in employment. If they are self-employed, from April 2015 they will have to stretch their income by another 50% and jump through an additional set of hurdles.

The Low Income Tax Reform Group (LITRG) suggest that this Tax Credits change runs counter to other areas of Government policy to help people move from welfare to work: “Jobseeker’s Allowance claimants are sometimes encouraged by Jobcentre Plus to turn to self-employment to start to take up work; indeed the New Enterprise Allowance actively encourages this. Historically, working tax credit has always been available as a means of easing the fragile financial transition, but this new test has the potential to leave them high and dry, with much uncertainty about in-work support, and raises the question whether they would be safer on benefits than trying to work.”

Concerns have also been raised about how the ‘genuine and effective’ test will be applied. LITRG say that similar tests have been used to cut tax credits rather than as a starting point to support the self-employed person to build their business and improve earnings.

WTC working hours’ threshold for self-employed people should surely match that of WTC for employees, enabling a level playing-field for people with caring responsibility and health conditions.

And legislation already requires all self-employed claimants to be working ‘for payment or in expectation of payment’. LITRG make the case that this should be enough to enable HMRC to balance supporting enterprise while stopping fraudulent claims.

A very high proportion of the new jobs delivered during the recession have been delivered by self-employed women. Average self-employed incomes have declined significantly. Self-employment is never an easy option, but for those with complex caring and health issues, it is often the only option. Rather than penalise this group, government should ensure that they are included in active labour market and business support strategies which help them to create a more secure livelihood which fits around those complex needs.

The Chancellor announced that: “the government is also supporting more unemployed parents to start their own business by extending the New Enterprise Allowance scheme from January 2015 and piloting the use of children’s centres to reach out to parents and provide them with the skills and employment support they need.”

The Children’s Centres pilot will be funded by a budget allocation of £5 million.

The New Enterprise Allowance is being expanded to include dependent partners in a couple’s JSA or ESA claim. This addresses an anomaly which has seen many women excluded from the NEA scheme.  Since it started in 2011, despite women being around half of the new self-employed during this period, they currently comprise just 30% of those benefiting from NEA. For the first year of the scheme women comprised just 17% of total beneficiaries.

But the NEA still does not take into account gender differences in the pace of business start-up. It is well documented that women tend to start their businesses at a more gradual initial pace. This differential pace has no impact on ultimate business success, but differential access to start-up capital and support does. However the NEA scheme requires participants to replace benefits with self-employed earnings within three to six months and subsequently deters women from accessing the funding and support which the scheme delivers. What’s needed is an extended NEA start-up period so that the scheme does not unfairly discriminate against women.

One of the most substantial elements of business support announced by the Chancellor almost entirely excludes women-owned businesses. The Chancellor pledged £400 million to support Venture Capital in Britain. VC is high-risk capital supporting a tiny minority of firms, with very low success rates. Less than 3% of businesses supported are estimated to have female directors.

Access to business finance continues to be a government priority. We’d like to see them assess the gender impact of those business finance and investment programme  to ensure a fairer share for women’s businesses.

It had been hoped that the Autumn Statement would include a small business exemption for new EU VAT legislation being introduced on 1 January 2015, which will require all small businesses to apply VAT on sales of digital product in the country where products are bought as opposed to the country where they are sold. While businesses with revenues of less than £81,000 of sales are currently exempt from registering from VAT in the UK, those selling digital products will not be exempt from the EU VAT rule. Techcrunch, the leading online news digest, has suggested those rules will hit women hardest: “The new rules are especially onerous for women entrepreneurs, who often start businesses from home, perhaps after starting a family or during their maternity leave. This is the fastest growing sector of the entrepreneurial community.”

Other small business measures announced include the extension of business rate relief for small businesses until April 2016. Since the downturn started, the High Street has become increasing female-dominated, with women leading 47% of new retail businesses, according to FSB data.

There will also be £20 million to provide support for first time exporters through UKTI. Recognising that growing numbers of those new exporters will be female led businesses, UKTI is already working to promote its services to female business owners.

Business will be supported to take on an Apprentice with the abolition of employers’ national insurance for Apprentices under the age of 25.

The Autumn Statement offered some welcome help for businesses in a position to start growing, but there was little for those still finding their feet in a new economic environment. Some of the measures announced in fact reduce entitlements and support for self-employment which is an increasingly women-dominated sector.

While the Conservatives tout 760,000 new businesses as a key economic achievement, support for those businesses remains far from equal.