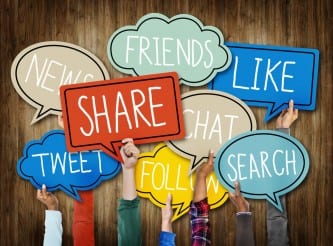 Thanks to our everyday use of social media, the whole concept of ‘sharing’ is continuously changing. In business, while it is still as important as ever to reach out to peers in a physical sense by attending networking events and exchanging business cards, a good deal of sharing and collaboration can now be conducted from home or the workplace.

The ease of using social media sharing to spread the word of your business makes it surprising that so many companies do it either poorly or not at all. According to a recent survey, only 7% of companies review their strategy on social media sites as frequently as four times a year.

often they change (Facebook – I’m looking at you in particular!). Without regular monitoring of both your strategy and the developments of the social platform you are using, you may be literally talking to yourself.

There are four main social networks dominating the scene, so let’s look at each of them and how they can be used for sharing:

At Engage Web, we’re increasingly pushing Twitter, as we believe it’s the most suitable platform for business. It’s certainly the most mobile-friendly, and it allows you to instantly find out who’s interested in your company and what’s being said about it. Even if something less than positive has been said, the immediacy of Twitter allows you to respond to this straightaway. Every company has its issues, nobody’s perfect and customers know it, but it’s how a business is seen to respond to issues that shows its true mettle. There are countless examples of companies taking negative publicity and turning it into a positive through sensible yet imaginative use of Twitter.

In terms of sharing too, it’s the best platform out there thanks to the re-tweet function that immediately helps you find new followers and publicity. Handles and hashtags, meanwhile, have helped people find out what’s hot in the news and what’s directly relevant to them. Always have an eye on what’s trending, but don’t used hashtags for the sake of it – make sure you can tie them in to your company’s core services.

While it remains the go-to social media site for most people, Facebook has become something of a quandary for businesses, in my opinion. What started out as a freely accessible page for friendly chatter has become heavily commercialised to the point where it’s hard for companies to get a Facebook foothold without a decent budget behind them.

Still, it’s the most visual network going, so it can’t be ignored. One way to bring in a healthy number of Facebook ‘likes’ is to run a competition, and we’ve found that even a comparatively small prize like a £10 voucher can generate a healthy buzz. That’s possibly the easy part; the task then is to sustain the interest of these people and engage with them.

Put yourself in your followers’ position here and consider what would make you continue to ‘like’ a page. If it’s constantly salesy, it will start to become an irritant in your newsfeed. Similarly, if you go too far the other way and come out with generic lines like “what are you doing at the weekend?”, you’ll become the business masquerading as the friend you never wanted. In each item you post and share, be sure to find that balance between what the general public wants to see and what you want to sell. This will gain you the most ‘likes’, comments and, best of all, shares.

It’s strictly business here, but LinkedIn has recently added an interesting feature to give its users more of a soap box. With account holders now able to make posts (you’ll see the pen icon in your ‘Share an update…’ box allowing you to do this), many business owners’ LinkedIn profiles are starting to double up as blogs for them to share their thoughts on their industry.

The idea is still in its infancy, but we’ve already seen this work well. With LinkedIn having business at its pulse, people are always keen to read views on their sector, as well as chip in with comments of their own.

Something of an unknown beast to many companies, Google+ is not gathering pace in the same way as the other three networks, but this doesn’t mean it’s to be neglected. Its key advantage for businesses is perhaps the interconnectedness it offers with tools like Google My Business, allowing you to instantly see and respond to any reviews your company might be getting. For its aesthetics, too, it’s often the favoured site of the internet-savvy.

Perhaps the greatest advantage of social media is that it never sleeps, thus making it ideal for the busy businesswoman who might have to spread the word about her company at convenient times around her family life. With tools like Hootsuite available to help you schedule your posts and tweets, you can write when it suits you and publish when it will have the maximum effect. Generally speaking, this is between the hours of 2pm and 6pm, when people are either winding down from work and might be having a sneaky look online, or are on the bus or train home and are scouring the web on their mobile.

Sharing has never been so easy and, with a sound social media strategy in place, you can be sure that you’re sharing in the right quarters as well.